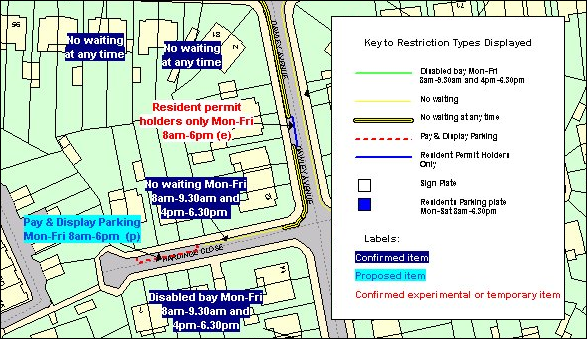 A new version has been released of the UK’s only commercially available software for managing traffic orders. ParkMap processes and stores both parking and moving traffic restrictions, using either traditional order schedules or the latest map-based format. The 20 enhancements in version 6 include a faster data structure, provision for regulatory measures that don’t need a traffic order, and allowing orders to be grouped into schemes.

Over the many years that ParkMap has been in use, numerous improvements have been made that needed additional columns and other changes to the tables. These have now been consolidated into a redesigned structure with faster indexing and much improved performance. It also provides a secure platform for further enhancements to be built upon in the future.

Print previews or map schedules can now be produced with the labels coloured as they will be when the orders are confirmed. The enhanced labelling functionality also allows both the size and the style of existing labels to be changed without affecting their content or position.

A scheme level has been introduced, to enable several proposed orders to be grouped together as a single scheme. It can be used to report on the progress of each scheme and its constituent orders until the time when it becomes operational.

Some enforceable measures on the highway can already be implemented without the authority making a traffic order (TRO or TMO). These include bus stop clearways and pedestrian crossings. This provision is expected to be extended in the forthcoming 2015 TSRGD to include school entrance markings and cycle lanes. Provision has been made in ParkMap 6 for the correct depiction of these items on maps and map schedules, even when they have no associated traffic order and the underlying restriction has not been formally revoked.

ParkMap 6.0 is now ready to be downloaded from our User Area by those with current support contracts.