You are here: home » news » software for the new 2011 traffic signs

Software for the new 2011 traffic signs

SignPlot 2.7 is ready and has many other new features

SignPlot 2.7 contains all you need for the new signs 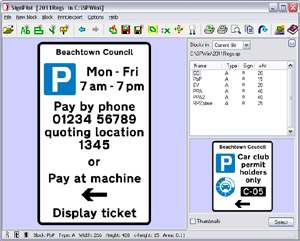 Ahead of the publication of the long-awaited amendments to TSRGD, version 2.7 of SignPlot now caters for all the new signs.

It has ‘wizards’ to create automatically the new parking plates and covers also the signs recently mass-authorised in England that have received little publicity.

2011 has seen many changes and initiatives relating to traffic signs. Whilst many of the proposals in the DfT’s policy document Signing the Way will take several years to implement, two sets of amendments to TSRGD will come into force. In addition, ministers and DfT have found an innovative and quicker route for introducing new signs. Twice this year authorities in England have received without requesting them ‘blanket’ authorisations for a range of signs. These new signs are also in version 2.7 of SignPlot, with a bilingual update to follow if the Welsh Government adopts the same procedure.

SignPlot, with its integrated SignLoad software, has always suggested the most slender sign supports by working with accurate local wind speeds. Posts and foundations have now been made even more economical, particularly for authorities in Wales and south-west England, by incorporating the recently updated wind data from EN 1991-1-4:2005+A1:2010 (part of Eurocode 1).

The revised software contains nearly 30 other improvements and builds upon the success of spell checking for traffic signs introduced into SignPlot earlier this year.